Churchill Manitoba Canada is one of the best places in the world to view the Arctic and all its wonders. From Polar Bears to Beluga Whales, Northern lights to the pristine waters of Hudson Bay, the Arctic is a virtually untouched modern wilderness, a place of beauty, peace and magic. Churchill Manitoba is also home to unique human-created sites like the Prince of Wales Fort, the Battery at Cape Merry, a Polar Bear home away from home, and the Miss Piggy Crash Site!

Awesome Things To Do In Churchill Manitoba, Canada 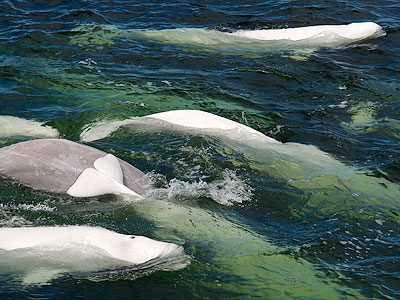 Something not to miss out on in Churchill: Round out your beluga whale experience by heading onto the Churchill River/Hudson bay estuary in a one- or two-person sea kayak. Paddle your way to the beluga whales – you can’t miss them, as vast pods breach the surface to breathe while feeding on capelin. Sit back on the calm waters and enjoy the show. Tap your kayak or sing up a storm, and the whales will come to check you out. Sea North Tours provides a Zodiac escort in case you get tired and need a tow. 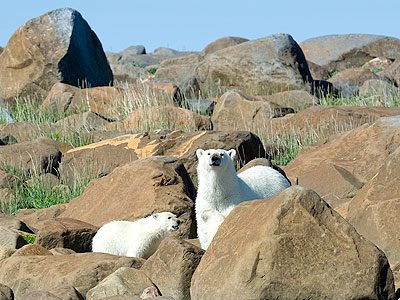 Although October-November is prime bear season here in The Polar Bear Capital of the World, the 600 KG Lords of the Arctic have been known to bum around Churchill in summer, too. Your Churchill to-do list must include bear watching! This mom and her two cubs were photographed right after a beluga whale snorkeling expedition in July 2010. Another mom and cubs, and a lone male were all within spitting distance.

The ethereal beauty of the Northern Lights is an unforgettable experience. Churchill lies beneath the Auroral Oval, meaning the lights are year-round (approximately 300 days a year), though, in spring and summer, long, bright days in the subarctic make them harder to see. But it’s the elusive nature of the phenomenon that makes it so special–right? 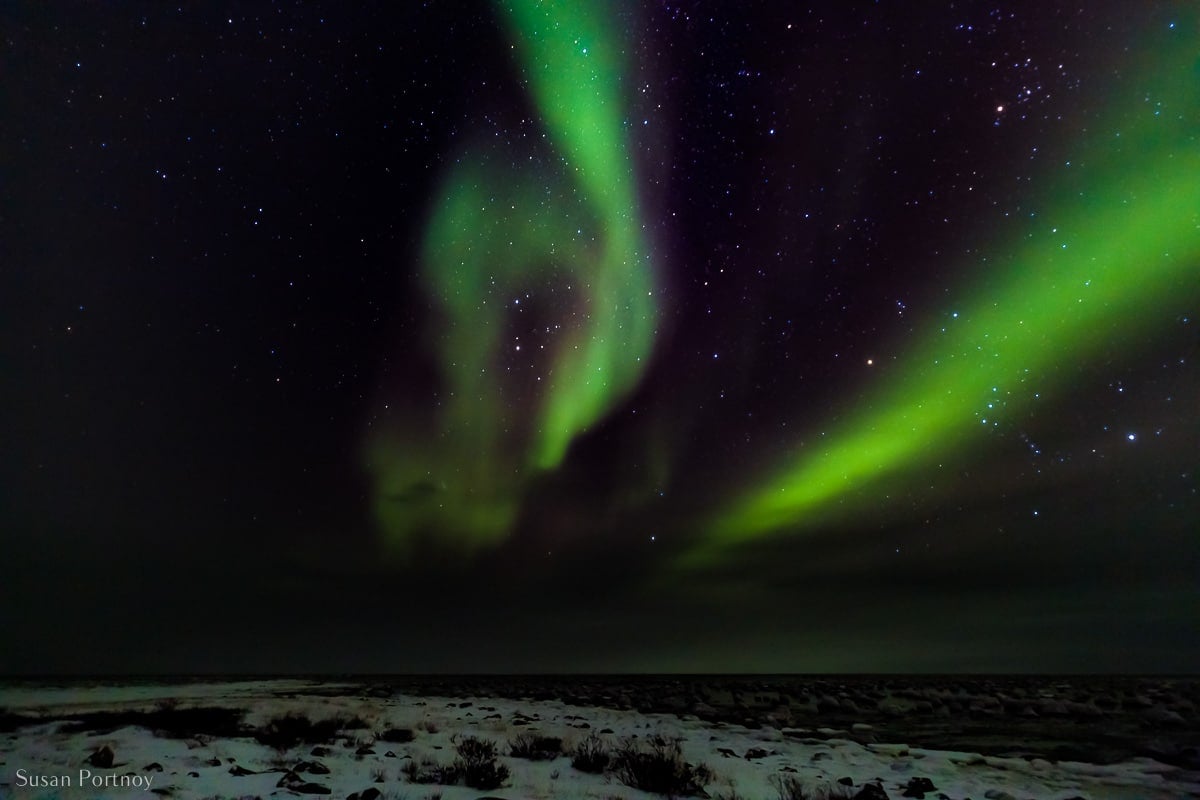 February and March are the ideal months to see the Aurora. At this time, the sun sets very early, increasing the chance of a sighting.

Frontier’s North takes its guests to multiple locations such as its exclusive Thanadelthur Lounge, a glass-enclosed viewing station parked on the tundra miles from town and light pollution; a yurt in the boreal forest; a traditional teepee with campfire at a mushers’ camp, and Dan’s Diner (see below).

Nat Hab hosts its guests at the Aurora Pod, a heated structure with glass windows and skylights providing a 360-degree view of the night sky. Heated plexiglass domes, a secluded woodstove-heated cabin, and the mushers camp replete with a teepee and campfire.

This one-room museum is small but packed with interesting artifacts from the indigenous people (Pre Dorset, Dorset, Thule, and Inuit) who lived in the region from 3000 through 1000 BC to the present. You’ll also find class-encased taxidermied animals: a 1500 pound walrus, an 800-pound polar bear, a 1200-pound Muskox, and an arctic fox. If you’re looking for books on the area or wildlife, there’s a great book section. 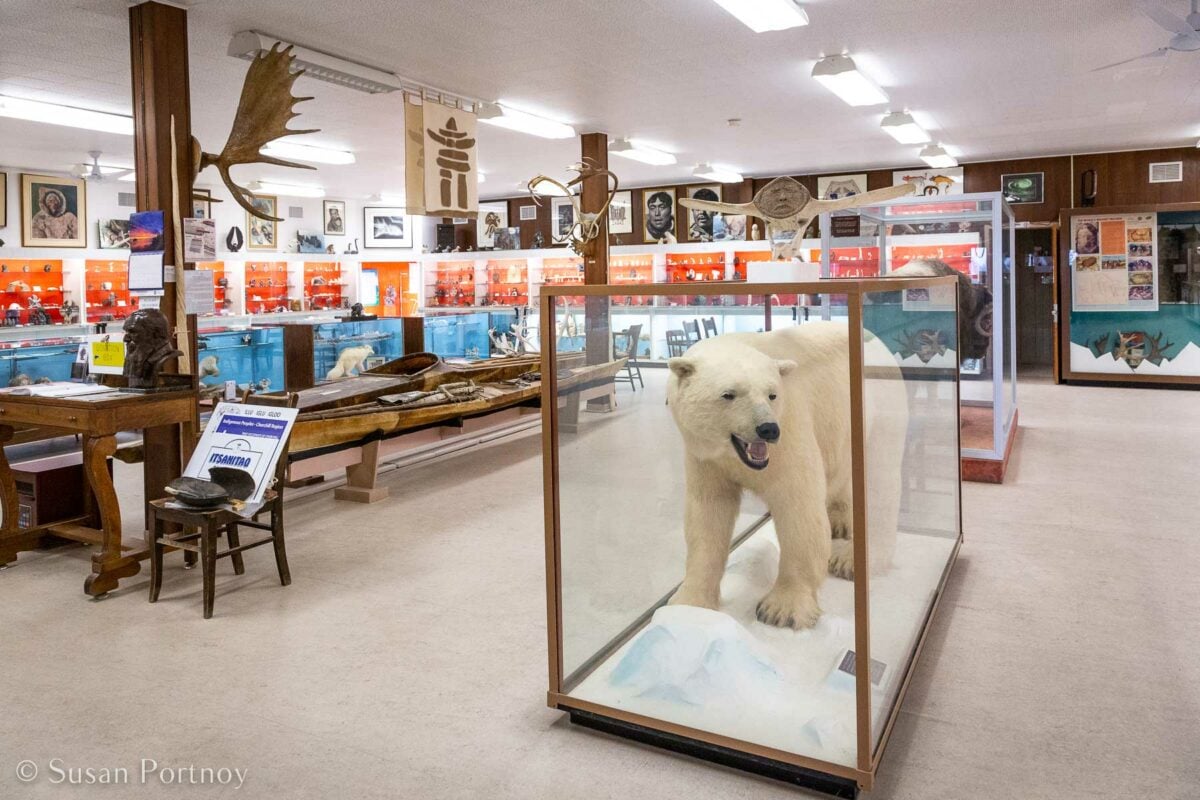 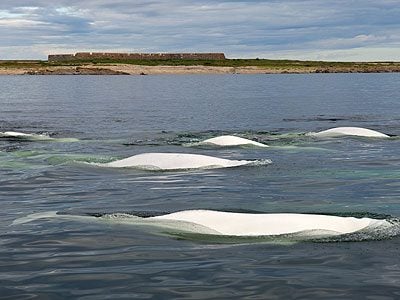 The next adventure to cross of your lsit of what to do in Churchill is a visit to this amazing fort. Built by the Hudson’s Bay Company in the 1700s to protect its fur-trade interests, the stone fortress is currently undergoing preservation work. Masons are busy repairing the stone while archeologists conduct research alongside, giving history buffs a unique opportunity to learn more about the architecture and history of the site. Tours are guided due to the ongoing year-round presence of polar bears.

Established primarily to protect polar bear maternity denning sites (wapusk is Cree for ‘white bear’) and critical habitats for waterfowl and shore birds, this remote park extends along Hudson Bay’s shores 45km southeast of Churchill. Its location between boreal forests and Arctic tundra makes it important when monitoring the effects of climate change. Visits center on polar bears and are only possible through licensed operators.

Located in a former aircraft hangar near the airport, this secure facility serves as holding center for problem polar bears who repeatedly turn up in Churchill and pose a danger to its residents. With the exception of family groups, bears are held for at least 30 days before being released. Repeat offenders may be relocated by helicopter.